I don’t think I’ve ever tried a banoffee pie and been disappointed. They’re just so basic and easy to make that it’s really difficult to make one and have it turn out to be a disaster. Digestive base, bananas, toffee and cream – that really is all there is to it! 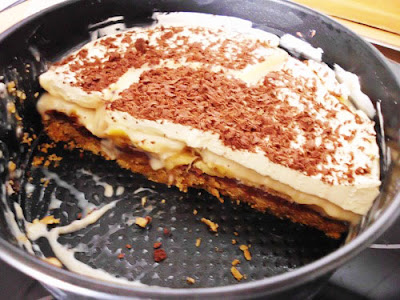 This was the first time I’d attempted to make a banoffee pie and I was really pleased with the way it turned out. When my dad came to visit, I offered him some and afterwards he said “I didn’t think I would like this but I suppose it was okay” which is about as much of a positive reaction as I can get out of him! 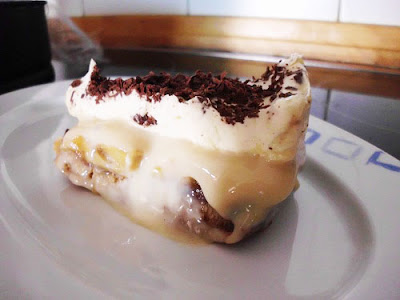 This recipe is really quick and easy to follow. The only parts which require a lot of time is the making of the toffee and the final chilling time – both of which require practically no effort.
Ingredients
200g digestive biscuits
75g melted butter
400g condensed milk
2 bananas, peeled and sliced
250ml double cream
4 tbsp grated dark chocolate
Recipe
1. Crush the digestives in a food processor for in a plastic bag with a rolling pin. Tip into a bowl and stir in the melted butter until combined.
2. Press the crumbs into the bottom of a lightly greased cake tin (mine was around 20cm) and chill in the fridge until the toffee is ready.
3. Place a bowl over a pan of simmering water and into it pour the condensed milk. Leave on the hob for around 2 hours, stirring now and again, or until the mixture is thick and toffee-coloured. Check the pan for water regularly and add more when necessary.
(I know many people boil the whole can of condensed milk, but I find that much more dangerous. If all the water evaporates with my method, you have a burnt pan. If all the water evaporates with the other method, you have a burn pan and your kitchen is covered in molten sticky toffee.)
4. When the toffee is ready, remove the bowl and pan from the hob and leave to cool to room temperature. Take the cake tin out of the fridge and place to one side. Place the chopped bananas so that they line the crumbs.
5. Spoon the toffee mixture into the cake tin and spread evenly. Whip the double cream and spread it on top of the toffee mixture. Sprinkle the grated chocolate on top.
It can easily be portioned up, wrapped in cling film and stored in the freezer for months.