A quick and simple red wine cocktail kissed with the flavours of the season, this fall sangria is a total crowd-pleaser all-year-round! You need just 7 simple ingredients and it can be ready in as little as 5 minutes if you're in a rush. And when sangria tastes this good, who isn't in a rush to drink it?!

Simpler is always better - especially when it comes to cocktails. You don't want to be following a 20-step recipe to make a 15-ingredient cocktail when you've had a few, right? And this fall sangria is beyond quick and simple.

It's is a slight variation on my easy sangria recipe, which you should totally give a go, too. The base is red wine, Cointreau (or triple sec - I'm cheap!) and lemon-lime soda. Orange slices give it a sweet citrus kick, green apple adds a tart burst and a sprinkle of cinnamon brings everything together and creates a sense of fall. That's all there is to it!

What is the best red wine for sangria?

Most people say a Spanish red is the best red wine for sangria. Since, you know, sangria is Spanish. I live in Spain, so I have ample choice. Although I always opt for a cheap bottle of red wine when making this sangria for fall. And when I say cheap, I mean really cheap. Like, €2 cheap.

When using wine in any cocktails (and even sometimes in cooking!) people say you should use a bottle you'd be happy to drink on its own. But because the only time I ever drink red wine is in sangria, in which all the other flavours really take the edge off a lesser-quality wine, I'm more than happy to go for something cheap.

So I suggest you save your pennies, but down that $12 bottle of red wine and pick up something that's on offer instead. The more you save, the more fall sangria you can make!

How do you serve sangria?

Traditionally, sangria is served in a litre sangria jug (this is pretty similar to what I use) at the table with small sangria glasses like these and a long spoon. The jug is filled with a handful of ice cubes and the fruit is left in it for people to scoop out and nibble at while drinking the sangria. Well, that's how it works around here, anyway.

For a stronger flavour, it's a good idea to leave the sangria to marinate in the fridge for an hour (or up to 24 hours) before serving. If you do, make sure you cover the top of the jug with plastic wrap so nothing else in the fridge interferes with the taste or smell. But if you're strapped for time, there's nothing wrong with whipping up a batch of fall sangria and serving it straight away.

How long do you let the fruit sit in sangria?

This one is totally up to you. If you're going to leave the sangria to marinate before you serve it, leave the fruit in for however long you're marinating it. After you've served the sangria - if no one's eating the fruit - I recommend you throw the fruit away as soon as you can. Red wine-soaked fruit sounds amazing, but it can smell a little off-putting when it's just sat there at your table.

What kind of apples do you use for sangria?

In this fall sangria, I used Granny Smith apples, simply because they're my favourite. But after a bit of research online, most people seem to prefer using this variety in sangria, too. They add a wonderful tartness which complements the sweet flavours.

How long will homemade sangria last?

You can usually leave a bottle of red wine open for 3-5 days without the flavour being impaired. But the fruit in this fall sangria can cause the wine to go bad much quicker. Because of this, I recommend you chill your sangria in the fridge (leave it in the jug and cover it with plastic wrap) and drink it within 3 days.

See the cinnamon stick in the photos? It's there purely for decoration. The cinnamon in this fall sangria recipe is this type of ground cinnamon which is dissolved by the juice from the orange slices. If you leave cinnamon sticks to marinate with the fruit in the sangria, they'll partially dissolve. No one wants to be sipping some delicious sangria for fall and have to spit out very strongly-tasting bits of tree bark.

I've got a few tips to help you make this fall sangria a little bit healthier by getting rid of added sugars and reducing the calories. Instead of using 1 tablespoon of sugar, use the equivalent amount in an artificial sweetener that you like. If it's a solid sweetener (like a powder or those mini pill things), treat it in the same way you would the sugar - dissolving it with the cinnamon by bashing the oranges until the juices come out. If you're not a fan of sweet drinks, you can skip the sugar or sweetener altogether!

And instead of using ordinary Sprite or 7UP, use a sugar-free, zero-calorie (or almost zero-calorie) alternative. Doing both of these will reduce each glass of red wine sangria down from 145 calories to 120 calories. I know it's not much, but every little helps when you're counting calories, right? 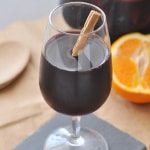 Assuming you get 6 glasses from the recipe, one glass of this fall sangria is 120 calories, if you use a zero-calorie sweetener instead of sugar and zero-calorie 7UP/Sprite. If you use sugar and ordinary 7UP/Sprite, each glass is 145 calories.

Calories: 120kcal
Keyword Fall Sangria
Tried this recipe?Let us know how it was!
« Wake Up Happy with these Healthy Hash Brown Egg Cups
Caramel Apple Martini »