Last week I decided to make a start on my Halloween baking. I know it’s only September, but October 31st will be here before we know it. I played it safely and used a favourite recipe of mine which I’ve made many times and jazzed it up with Halloween decorations. 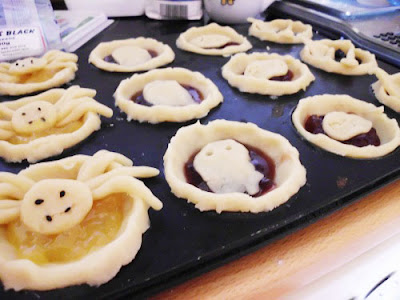 I was so worried that my oven was going to completely destroy my works of art that I took a picture of the raw pastry before I put them in the oven, just in case. Fortunately, the tarts and the decorations kept their shapes really well – even though one unlucky ghost drowned in jam and a spider received a few broken legs. 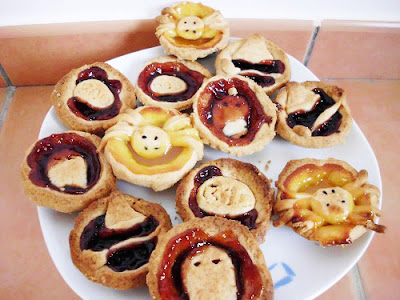 I fashioned spiders, ghosts, ovals with ‘BOO’ written in them and witches hats and broomsticks out of the same pastry used for the rest of the tarts. The spiders definitely took the longest and were the most fiddly, but I think it was definitely worth it. 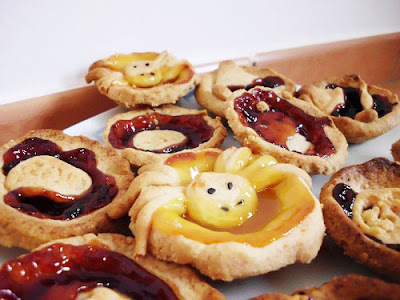 The spiders were made by rolling a ball of pastry, attaching pastry legs, a cocktail stick to carve a mouth, and poppy seeds for the eyes and fangs. For the ghosts, I rolled out an oval of pastry and dragged my fingers down it so the bottom thinned out – the eyes were simply holes. I carved the word ‘BOO’ by dotting with a cocktail stick and the witch tarts were made just by rolling pastry into the desired shapes.
This recipe makes 12 jam tarts.
Ingredients
200g flour
70g lard
50g butter
Pinch of salt
50g sugar
2 tbsp water
Various jams
Recipe
1. Heat the oven to 180C and grease a very shallow muffin tin.
2. Combine the flour, salt and sugar.
3. Chop the butter and lard into small cubes and add to the flour. Rub the fats into the flour with your hands until the mixture resembles coarse breadcrumbs.
4. Add a few drops of water at a time until the mixture forms a good dough. You should need somewhere between 1tbsp and 2tbsp.
5. Knead the dough before rolling it out and use a cutter to cut out circles and place in the muffin tins. Tidy the edges of the pastry so they’re neat. Put the remaining pastry to one side.
6. Place very small amounts – between a teaspoon and tablespoon – of your chosen jam, curd or marmalade in each tart.
7. Make decorations out of the remaining pastry and place on top of the tarts.
8. Place in the oven until golden brown – about 20 minutes.