Okay, so maybe calling these Healthy Chocolate Chunk Brownies is pushing the boat out a little, but they’re healthier than regular brownies. They aren’t packed with vegetables or beans, but instead they completely replace any added butter with a much healthier alternative – Greek yoghurt. 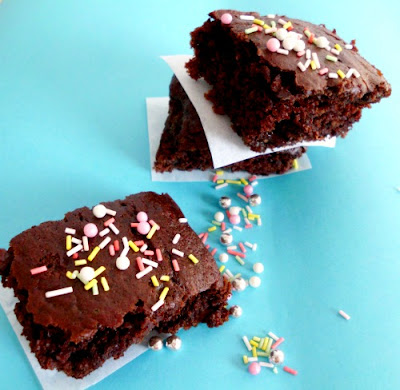 This is quite a serious statement to make, but I have taken a lot into consideration and can honestly say that these are the best brownies I’ve ever made. Wonderfully soft and velvety, whilst densely fudge-like at the same time – they are everything I look for in brownies.
The original recipe called for flax seeds – something that I’ve never ever seen in a Canarian supermarket – in place of eggs. I didn’t want disappointingly flat brownies, so I whipped, whipped, whipped two egg whites and folded them in to get air into the batter. I also sifted all of my dry ingredients to make the result as light and airy as possible. 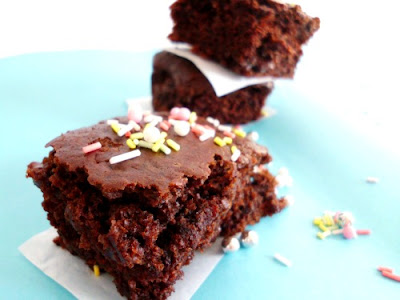 If you’re really craving brownies but are trying you’re hardest to cut the calories – may I suggest you avoid a dessert? – then you could also cut out the chocolate chunks. You’ll end up with the same fudge-like texture with less of the fat and sugar. I wouldn’t recommend reducing the sugar in the recipe, though; these brownies are perfect – not too sweet at all.
If you’re feeling good about all the calories you’ve saved from not adding any butter into the mix, then treat yourself and top these brownies with a deliciously tempting Chocolate Buttercream Frosting. =D 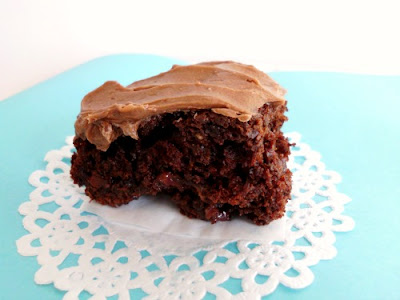 Healthy Chocolate Chunk Brownies
Makes 12 small brownies
Inspiration from In Sock Monkey Slippers
Ingredients
150g dark chocolate
1/3 cup milk chocolate chunks
1 cup Greek yogurt
½ cup sugar
1 teaspoon vanilla extract
¾ cup flour
2 eggs
½ teaspoon baking soda
Pinch salt
Recipe
1. Preheat the oven to 350F/175C and line an 8”x8” baking tray with parchment paper. If you don’t have any parchment paper, you’ll have to generously grease the dish so your brownies don’t stick.
2. Melt the dark chocolate in the microwave. Remove every 30 sections and stir to make sure it doesn’t burn.
3. Separate the eggs. Beat the whites until you have stiff peaks – this is best done with an electric mixer.
4. Stir together the yoghurt, melted chocolate, sugar, egg yolks and vanilla extract.
5. In a separate bowl, sift the flour, baking soda and salt. Gently fold this into the chocolate mixture until just combined.
6. Carefully fold in the egg whites and chocolate chunks. Folding is the best method here – if you over-mix the batter at this point, you’ll end up with flat brownies.
7. Bake for around 18 minutes, or until a toothpick inserted in the middle comes out with a few crumbs sticking to it.
8. Using the parchment paper as a handle, remove the brownies from the baking dish and allow to slightly cool on a wire rack. Cut into squares and serve warm.
Here are the link parties I take part in.
Come and join the fun!