I've got a great big wall-size east-facing window in my office, which means that during summer, I've got to have the blackout curtains tightly shut from first thing in the morning until about 3pm otherwise I'll turn into a melted puddle on the floor as the interior temperature rises above boiling point. Okay, I might be exaggerating a little, but that's how it feels! 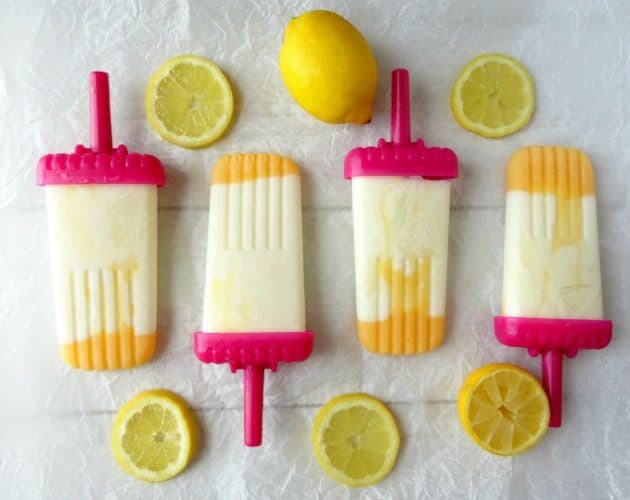 So I don't feel like I'm a total loner separated from the rest of the world (seriously, it's a good job we're still fostering kittens or I'd have no one to talk to Monday-Friday) I like to open the curtains and look at the world. So far, the only way I've found to keep my blood from boiling due to the heat is to snack on as many frozen desserts as I can without getting brain freeze. Skinny Frozen Yogurt Tiramisu is great when I need a caffeine kick, but it doesn't come close to these healthy lemon cheesecake popsicles. I mean just look at that great big dollop of lemon curd you get in every single popsicle!

Apologies for the severe lack of photos in this post. Like I said, temperatures are crazy hot here and trying to photo rapidly melting popsicles in 1pm heat whilst two of the cutest fluffy ginger kittens in the world mew and paw at my ankles is no easy feat.