Sleepless nights, being covered in bodily fluids that aren't yours and bottle feeds every couple of hours. This is my life right now. Nope - I don't have a newborn in the house (although I wish I did, I think it might be easier!) I've got three orphaned kittens who are 19 days old today. My boyfriend and I volunteer for a charity which traps then spays/neuters wild cats and fosters kittens until they're old enough to be adopted. We've had these kittens since the very same day they were born and let me tell you - the cuteness factor is starting to wear off now.

I thought the older the kittens got, the easier they would be to look after. Wrong! When we first got them, we just had to feed them and then put them back in their box to sleep. Not as easy as that any more. Now we have to feed them and play with them individually for about 20 minutes before they'll go back in their cage and settle down. This isn't such a big deal on a weekend or on an evening when I don't have anything to do and my boyfriend is home. But on a weekday when I'm on my own and I've got deadlines to beat? Not so much fun. I'm so glad you can't see through the monitor right now - I look like a sleep-deprived zombie running on caffeine alone. 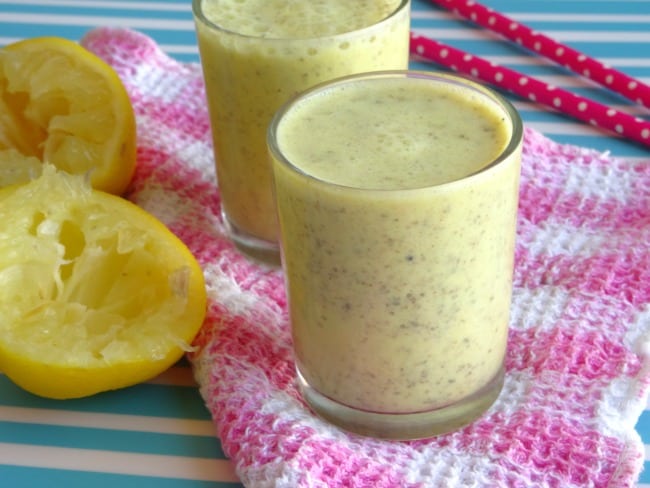 Something else that is making sure I'm functioning enough to be able to type on a keyboard is this lemon yogurt smoothie. I love making citrus stuff at this time of year and lemon is my favourite citrus fruit. Or maybe it's grapefruit. Have you tried my Sweet Grapefruit Kiss Cocktail? It's not healthy, but it's amazing! But anyway, spring = lemon so I thought it was only right that I show you guys how to make a lemon smoothie! But not just any lemon smoothie. A rich, creamy smoothie packed with goodness that you can have for breakfast, for a snack...or just to cheer you up when you realise you've got kitty cat poo on your new favourite trousers. 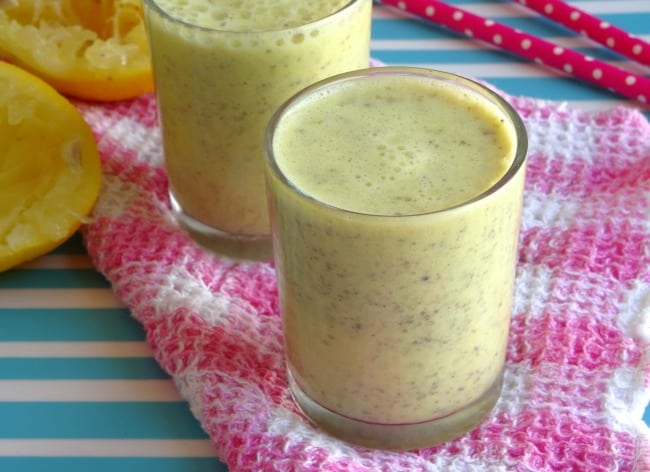 Lemon is usually paired with poppy seeds, right? But I've combined the flavour with chia seeds to make this easy lemon smoothie super-healthy. Chia seeds are jam-packed full of nutrition and adding a tablespoon of the superfood into a smoothie is one of the easiest ways of getting them into your diet. If you're not a fan of the texture of chia seeds (they can be a bit tapoica-like) I recommend you get a really powerful blender. I've got a Magic Bullet Nutribullet and that thing grinds up the chia seeds so finely you can hardly tell they're there!

Tried this recipe?Let us know how it was!
« Chocolate, Peanut Butter and Banana Breakfast Bake
Key Lime Greek Yogurt Smoothie with Chia Seeds »