A crispy, crunchy homemade hash brown cup loaded to the brim with ooey-gooey melted cheddar cheese, chunks of juicy smoked ham and a soft-baked egg on the top. These Monte Cristo Hash Brown Breakfast Cups should definitely be making an appearance at your breakfast table this weekend!

How do you like your hash browns? Soft and chewy (um, no) or crisp and crunchy (yes!) I hope you're the crisp and crunchy kind of hash brown person, because that's the only way hash browns should ever be served. My boyfriend loves them when they're soft, but soft hash browns are just raw hash browns to me. And no one wants to eat raw potato. Although that same boyfriend once did eat a giant dessert spoonful of raw grated potato when he thought it was some kind of tuna salad. I totally know how to pick 'em, right? 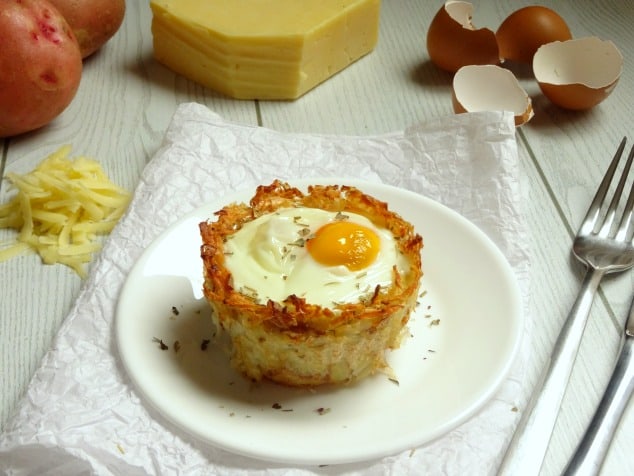 But anyway, if you love crispy, crunchy, golden brown hash browns then you're in luck because that's exactly what you're getting today! To ensure these hash browns are the very best they can be, you need to bake them on their own first without stuffing them with the delicious fillings.

Then when they're just getting to golden brown perfection, add the cheese, ham and egg and cook for a final 15 minutes. These babies do take about an hour to make from turning on the oven to sitting down to eat, but the wait is totally worth it. Set aside an hour on your calendar to make them this weekend!

From the outside, these cups look like ordinary hash brown breakfast egg cups with just potato and egg. But they are oh-so much more than that! Slice through the centre of one and you'll reveal long strands of melted cheddar cheese (extra points if you can get your hands on a smoky cheddar cheese!) and juicy chunks of quality ham (or crispy bacon!) which go so well with the crunchy potato and soft-baked egg that you'll swear you're in breakfast heaven.

Can't get enough of breakfast cups? Try these breakfast egg cups made with toast or these healthier broccoli cheese hash brown egg cups.

Calories: 310kcal
Tried this recipe?Let us know how it was!
« Healthy Lemon Cheesecake Popsicles
Triple Chocolate Donuts with a Dark Chocolate Glaze »