An easy, simple breakfast recipe seems the ideal way to begin a Monday morning. Breakfast is my favourite meal of the day, but we don’t always have all the time in the world to prepare a fancy and indulgent dish. With this recipe, you can have a great-looking and fantastic-tasting breakfast in minutes with minimal effort. 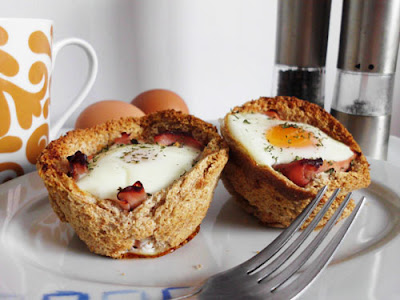 There is a lot of room for personal additions with this recipe. How about adding cheese? Or swapping ham with pre-cooked bacon or sausage? I find a great big dollop of sauce underneath the egg really helps this recipe and makes it a lot less messy if you’re planning on eating it on the go. 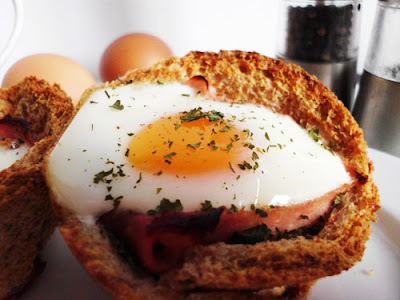 This recipe makes two breakfast egg cups, but it can easily be adapted to make as many or as few as you like.
Breakfast Egg Cups
Ingredients
2 pieces of bread
2 eggs
2 slices of ham
Sauce of choice
Parsley
Salt and pepper
Recipe
1. Preheat the oven to 180C and lightly toast 2 pieces of bread in a toaster.
2. Using a round cutter slightly larger than your round mould, cut circles out of the toast and place them in the bottom of the moulds.
3. Dollop some sauce in the bottom of the toast cup and cover with a piece of ham. Crack an egg on top – be careful not to split the yolk! – and bake in the oven for around 20 minutes, or until the yolk has set.
4. Remove from the oven and season with salt, pepper and parsley.
Creamy, chocolaty and dense – I didn’t realise that people could fall in love with sweets or candy until I tried Oreo Cheesecake Truffles. One layer of chocolate didn’t seem enough to hold in the immense melt-in-your-mouth goodness that these truffles had to offer, so I turned it up a notch and added another layer of chocolate. 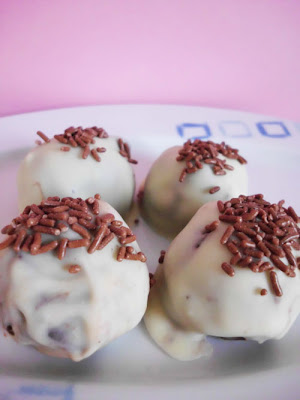 These Double-Dipped Oreo Cheesecake Truffles are so easy and require minimal effort to make, yet still look amazing and taste fantastic! You could easily decrease the amount of cream cheese used here, but you probably won’t get the thick, fudge-like texture that I was going for. 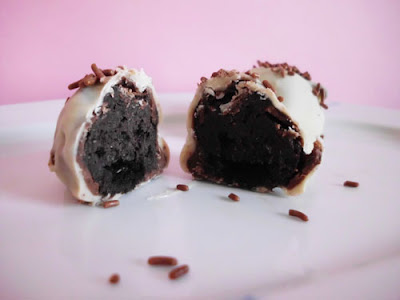 Double-Dipped Oreo Cheesecake Truffles
Makes around 10 truffles
Ingredients
8 Oreos
5tbsp cream cheese
100g milk chocolate
100g white chocolate
Chocolate sprinkles or Oreo crumbs to decorate
Recipe
1. First you need to crush the Oreos. You can do this easily with a food processor or the fun way by placing the Oreos inside a sealed plastic bag and bashing them with a rolling pin.
2. To the crushed Oreos, add cream cheese and mix well. Separate about 1tbsp of the mixture at a time and roll into balls and place on a plate.
3. Melt the milk chocolate in the microwave. Make sure you remove and stir every 20 sections to avoid the chocolate burning and becoming unusable.
4. Dip every Oreo cheesecake ball into the chocolate and make sure it’s fully-coated. Place them all on a plate and leave in the fridge for an hour to set.
5. When the chocolate has fully hardened, melt the white chocolate and coat the Oreo truffles again. Before placing them in the fridge, sprinkle crushed Oreo or chocolate sprinkles on top for decoration.


Link parties: Sugar and Spice
Come and join the fun!
I’ve recently acquired a favourite indulgence that might seem a little odd to some of you and others may question why I only discovered it a short time ago. Brightly coloured produce pilled high, bustling aisles packed with people searching for ingredients, rough voices bellowing the latest offers. What am I talking about? My local farmers’ market, of course. 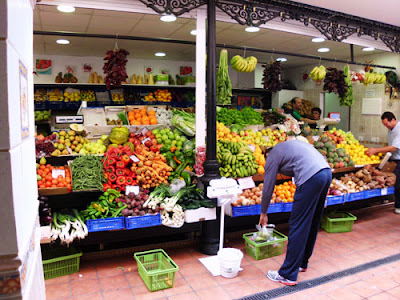 Although technically not my local market – although can anywhere on the tiny island of Tenerife not be considered local for anyone who lives here? – my favourite one has to be the Mercado de Nuestra Señora de Africa in Santa Cruz. Here you’ll find not only a spectacular array of the finest fruit and vegetables, but also a great selection of fresh cuts of meat, a huge choice of home-made pastries and stalls offering locally-produced wine and honey. 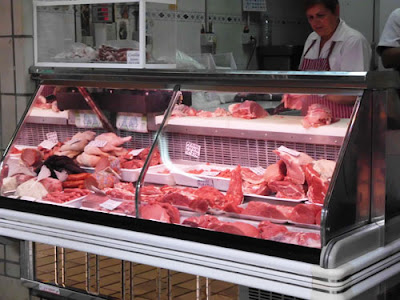 I had not been to this farmers’ market in some years and I was surprised to see some almost prestigious-looking shops in the otherwise rough-around-the-edges market. The first one to catch my eye was a modern, yet quaint tea-room called Mi Rincon Favorito (My Favourite Corner). Unfortunately, different varieties of tea don’t usually get me excited but even I was stunned at the sheer amount of choice available here. 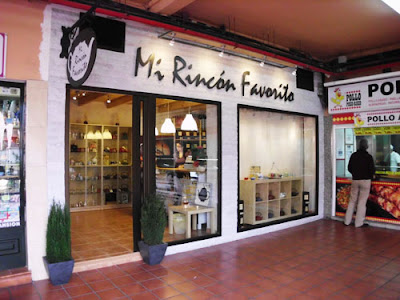 Not only was their selection of teas fantastic, but they also had every flavour – is this the correct way to describe it? – of incense imaginable, as well as loads of coloured and flavoured sugar crystals packaged in cute little bags with ribbons. 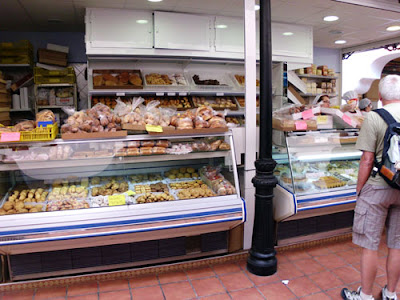 It’s typically Spanish and very old-fashioned – possibly even bordering on misogynistic – but every time I see this scene it always makes me smile. The women, most of them between 50 and 70, go off in large groups to gather what’s needed for the week’s food and gossip about last week’s events. Meanwhile, the men reside in large cafes in the centre of the market, happily putting down each others’ favourite football teams and drinking Tenerife’s favourite beer straight out the bottle – Dorada. This scene probably doesn’t sound that unusual – until I point out that it takes place at 9am. This will go on until well into the afternoon, until the women – laden with bags – have to prise their drunken husbands away and get them home. Ian and I opted for a coffee instead. 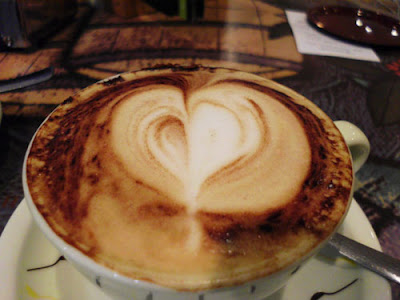 That’s one of the reasons I love farmers’ markets so much – they aren’t just places to buy the freshest and best-priced produce, but they are microcosms in their own right. They are places to meet new friends and keep in touch with old ones. They are places to get a hold of the best seasonal produce available whilst also supporting local farmers. Personally, I think of farmers’ markets as places to discover food the likes of which I have never seen before. 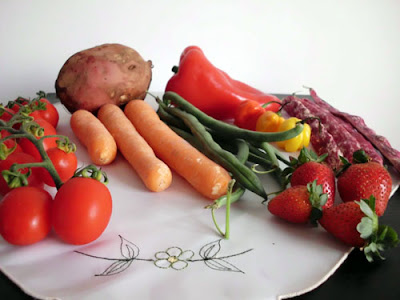 There is something incredibly exciting about coming across something bizarre-looking here. For me, it was the pink/purple broad-bean looking things on the right of the above image. Do I ask the person behind the stall what they are and how I should cook them? Or should I just scoop them up and experiment on my own? The second option sounded more fun – but I really should have asked for some advice! They didn’t turn out well at all. 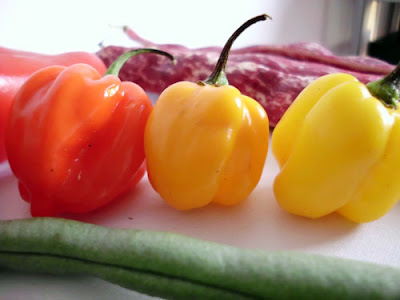 But that’s all part of the fun of it! If you always stick with what you know, you’ll never discover anything new and where’s the excitement in that? but beware, if you’re like me, and are drawn by bright colours when food shopping, you’ll be trying to snap up almost everything you lay your eyes on. 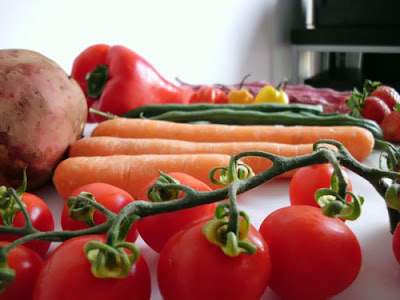 So this weekend, don’t lie in bed until noon and grab yourself a bowl of cereal for lunch. Get up early and head down to your local farmers’ market and pick up a load of interesting ingredients to make a great dish. I’m sure you won’t be disappointed.
Chilli is a great dish to enjoy on cold winter evenings. I came up with this recipe in an attempt to find a type of chilli that I enjoy. I love the idea of succulent beef chunks in a rich, spicy tomato sauce, but when it arrives on the table, I’m always disappointed. I’m not sure if that says more about my fussiness or my cooking! 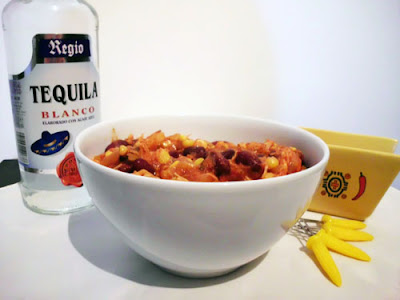 This chicken taco chilli recipe is a great Mexican take on a traditional classic. The additional ingredients really take this dish to a whole other level that I feel regular chilli recipes really lack. 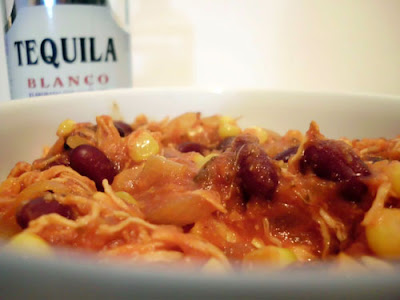 I can’t wait until the clocks go forward! These pictures were taken using the mother-in-law’s daylight lamp and just seem to give the photos a hint of blue. Bring on summer!
Ingredients
1 chicken breast
1/2 onion
1 garlic clove
1/2 red pepper
1/2 cup kidney beans
3tbsp sweet corn
1/2 cup chopped tomatoes
2tbsp tomato paste
3tbsp taco seasoning (I used this recipe for home-made taco seasoning – it’s my favourite!)
Recipe
1. Place the chicken in a saucepan and add enough water to just cover the chicken. Bring to a simmer and cook for between 20-30 minutes. When fully cooked, drain the water and shred the chicken with two forks.
2. Chop the onion, garlic and red pepper and fry over a medium heat for 10 minutes. Add the kidney beans, sweetcorn, chopped tomatoes, tomato paste and taco seasoning. Let simmer for another 10 minutes.
3. Add the shredded chicken and cook for a final 10 minutes, stirring regularly.
I didn’t have much opportunity to blog this week because I was enjoying a much-deserved Valentine’s holiday. I did manage to write up a couple of chocolate themed posts, though:
Triple Chocolate Mouse Cake 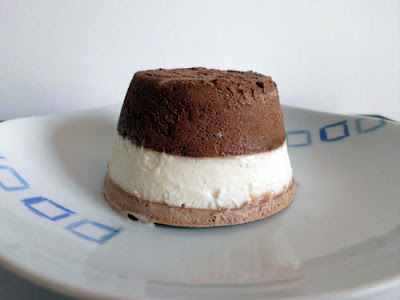 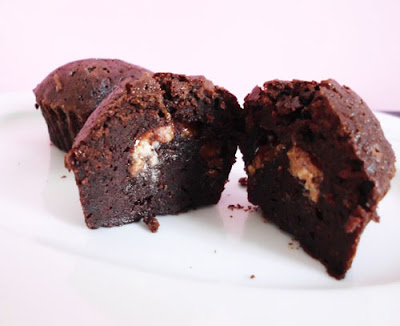 Whilst in Rome, we visited two cupcake shops! It probably doesn’t sound very exciting to most people, but in Tenerife I have yet to find a proper cupcake shop, so each time before we venture away, I always research any nearby cupcakeries.
We popped into Sweety Rome for a chocolate brownie with caramel frosting and a chocolate cupcake with chocolate frosting. 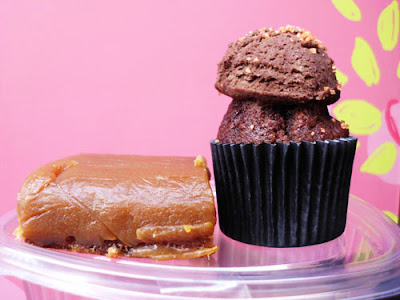 Unfortunately, neither of them was up to much and we were left really disappointed. The caramel frosting tasted very peculiar, the cupcake was heavy and the frosting was rock solid and looked like it had been put on with an ice-cream scoop.
However, we did visit another cupcake shop during our stay – The Perfect Bun. Everything about this place was amazing. As soon as we walked through the door we were welcomed by the amazing smell of freshly baked cupcakes coming just out of the oven. 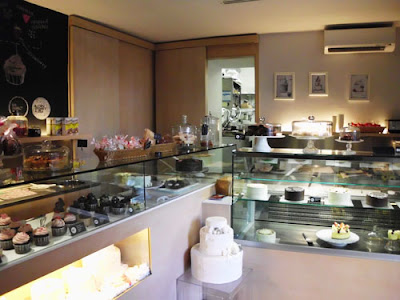 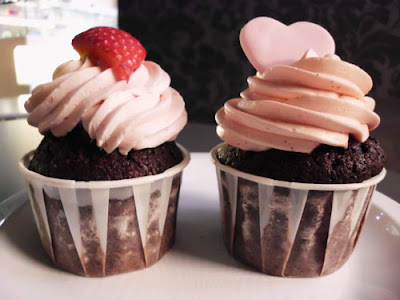 We got to savour these great cupcakes in a cosy little corner filled with comfy furniture and cute baking pictures. There were many beautiful large cakes in addition to the cupcakes. Ian’s favourite was a winter-themed igloo cake – he was shocked that everything down to the penguins were made out of cake and not plastic! 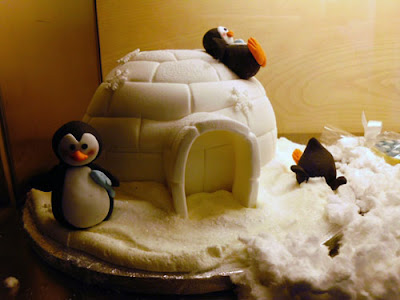 We enjoyed so much delicious food in Rome. Slices of pizza were cut from great big slabs – no round pizzas here! Every single cafe or pizzaria seemed to use only the freshest ingredients which made every bite fantastic. 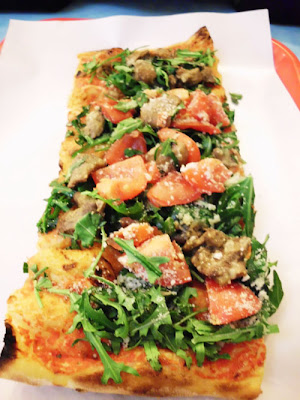 I didn’t think Nutella was much of a big thing in Europe – Rome definitely proved me wrong. Sandwich shops served it between bread, bakeries served it inside croissants, pizzarias served it between focaccia and cafes even served small tubs of it to eat on its own! I even found small jars of Nutella which were intended to be used as Christmas decorations! 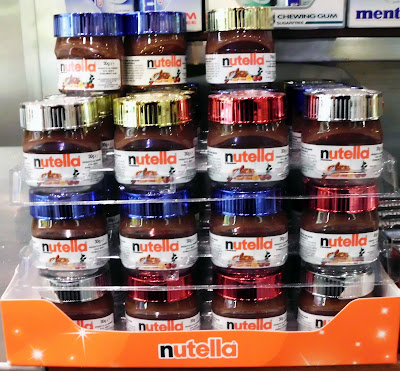 Due to the snow, loads of the major tourist attractions were closed, but we did manage to visit:
The Trevi Fountain 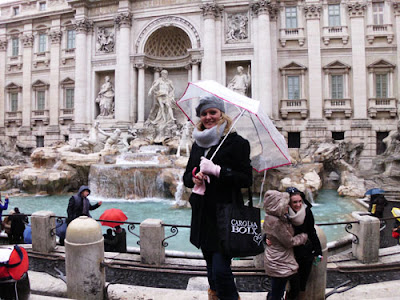 The outside of the Colosseum – it was closed the whole time we were there! 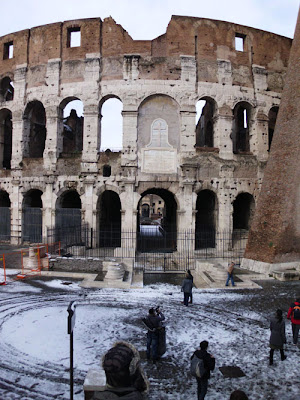 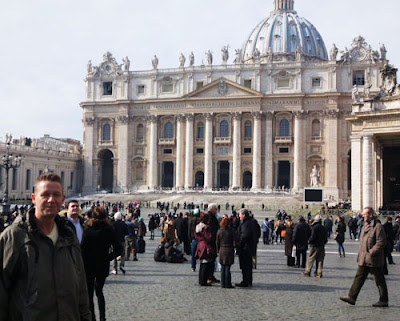 Ian was brave enough to climb the 600+ stairs to the top! Even the photo of the view makes me feel dizzy. 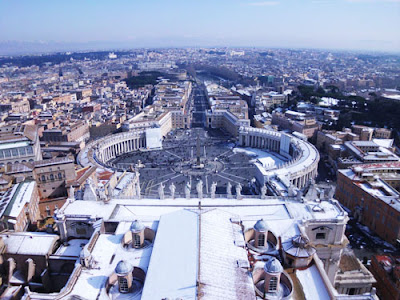 I’m really glad to be home – I couldn’t stand the cold temperatures any more. Instead of using the fridge in our room, we kept our drinks on the window-sill outside because it kept them colder!
I hope you all have a great weekend!