One of my favourite things about living in Tenerife is that there always seems to be a festival going on in some part of the island. From small fiestas with music and dancing, to huge carnivals with parades and concerts, the one thing that is always fantastic at these parties is the food.
There was a small carnival in Los Cristianos a while ago and Boyfriend and I decided we had to go so we could have a ‘papa asada’ or jacket potato. Now, the thought of a jacket potato probably doesn’t strike you as anything worth going out of your way for, but believe me, these are definitely worth the trip. 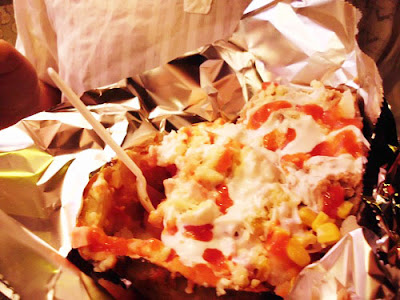 Loaded with ham, tuna, cheese, olives, carrot, sweet corn, alioli and sweet chilli sauce, these jacket potatoes may not be much to look at, but they taste amazing. The setting definitely enhances the flavours and enjoyment to be had from these potatoes. 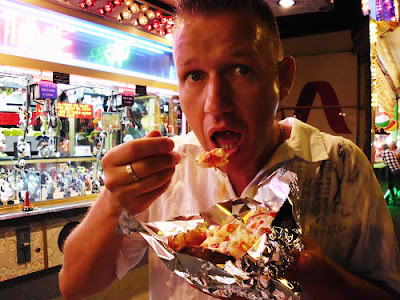 Large families meander through the stalls, trying their hardest to keep track of their kids who are begging to go on some rides. The lights from the arcades and the amusements are reflected in everyone’s large eyes as they try and take in as much of the intoxicating atmosphere as they can. Typical Spanish music is pumped through the streets, as entertainers bustle amongst youths dancing in their attempt to reach the stage on time for their performance. 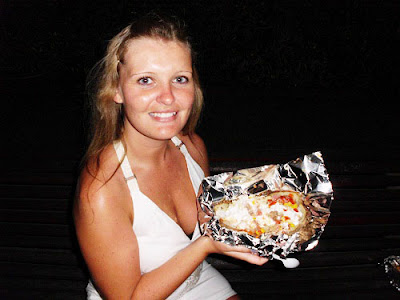 Bought from the ‘Paponazo’ van for only €4, these potatoes are taken from a huge furnace which has completely charred the skin on the outside. The toppings are then piled high onto the potato, which gets stabbed with a plastic fork before being thrust in my hands.

The first bite is akin to an assault on the senses – the taste buds are simply overwhelmed by the amount of flavours on the tongue. By the time the second bite has been had, I’m hooked and have to carry on until nothing but the blackened, ravaged skin and an empty foil basket and plastic fork are left.

Have you ever visited the Canary Islands and decided you loved them so much that you’d like to move here? Then check out the Moving to Tenerife book I co-authored! It’s a detailed guide book full of everything you need to know about moving to Tenerife (and the Canaries in general) including how to get a job in Tenerife, how to become a resident in Tenerife and some basic Canarian phrases that will help you get by in everyday life.