I thought I'd give you all a break from the abundance of skinny recipes and share with you one of my all-time favourite Canarian recipes - Papas Locas. There's not much too them, but they make an awesome snack or casual appetizer.

For those of you who haven't been following Pink Recipe Box for a long time, I'm a British native but I've lived in Tenerife in the Canary Islands (Spain) for over half my life. Apart from two recipes for Papas Arrugadas and Mojo sauces, as well as some posts on Perrito Caliente Especial and Papa Asada, there are hardly any Canarian-inspired posts on this blog - something which I'm determined to change! 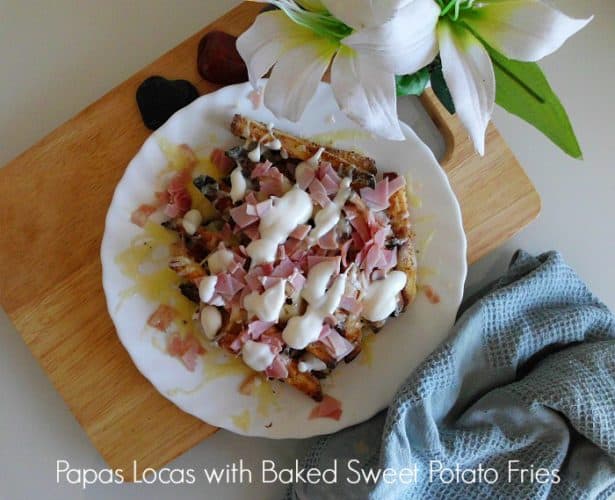 Papas Locas is a dish commonly served in cafes throughout Tenerife and Spain in general. It's not a fancy dish by all means, but it's fun, fast and cheap - what's not to love? Papas Locas are normally served with bought-in fries - always made with regular potatoes - but if you're really lucky, the bar or cafe will have assembled the dish with their own hand-cut fries - this makes the dish even more fabulous than it already is. 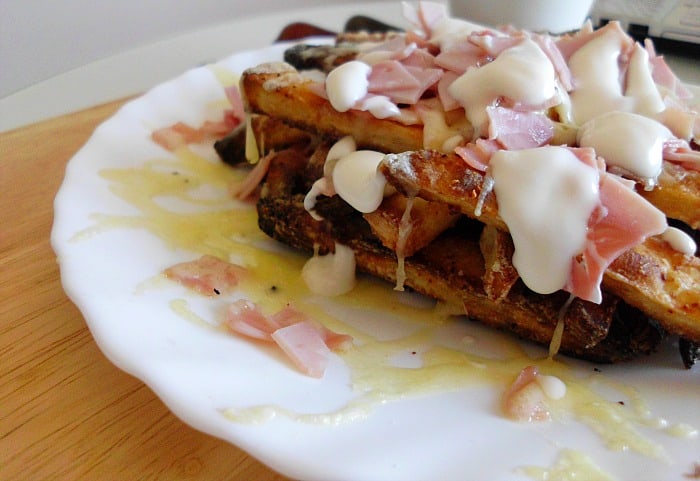 I decided to switch out the regular fries for sweet potato fries because, c'mon, everything is better with sweet potatoes, right? Unfortunately, when I peeled my perfectly ordinary looking sweet potato, I was greeted with a shocking white interior. Do you ever get this? 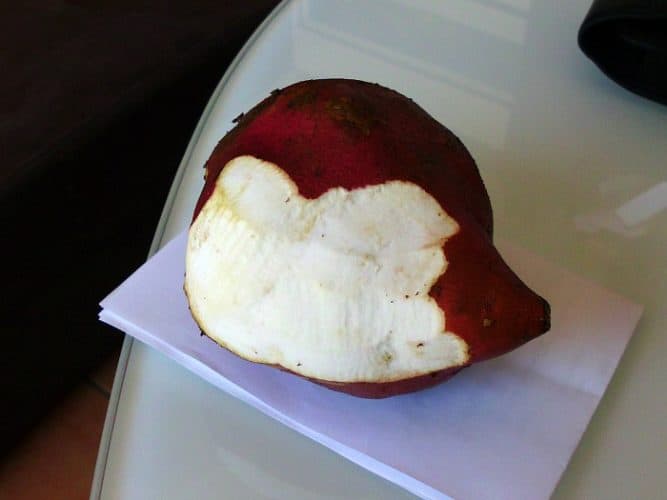 In Tenerife we get two different types of sweet potato - they're both labelled as 'Batata' and have the same purple/red skin on the outside, but until you peel them you never know whether you're going to get a wonderfully vibrant orange centre or a sparkling white one. Fortunately, they both have the same taste and texture - or so I think, anyway - so it doesn't really make much of a difference which one you get. 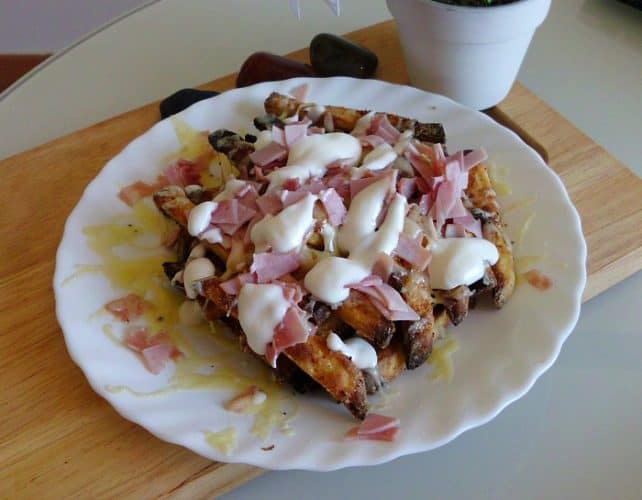 Don't feel that you have to use sweet potatoes to make these Papas Locas - that's not the case at all! You can use hand-cut fries made from regular potatoes or even shop-bought frozen fries - whatever you prefer or have time for. It's just occurred to me that I'm 350+ words into this blog post and I haven't even told you what Papas Locas means! 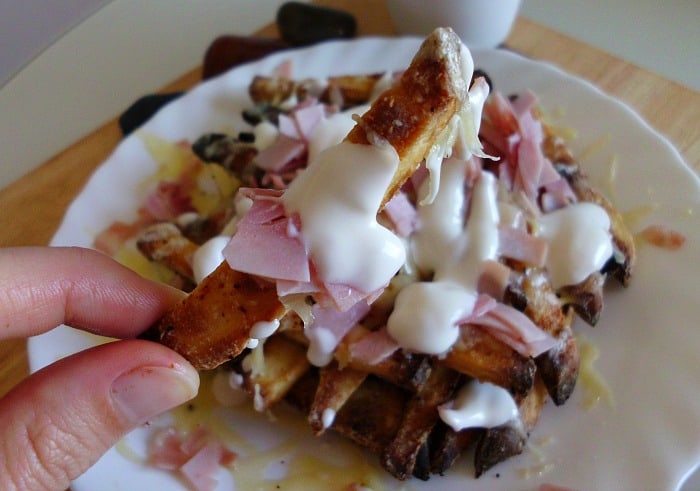 For those of you who aren't fluent in the lingo, Papas Locas literally means Crazy Potatoes (or Crazy Popes, depending on which translator you use!) I've never asked anyone, but I assume that the 'craziness' is the abundance of ham and cheese which smothers the fries. For a nation which regularly fires fireworks from tiny wooden boats and drags camels into the sea so they can be blessed, this seems a pretty timid use of the word crazy, don't you think? 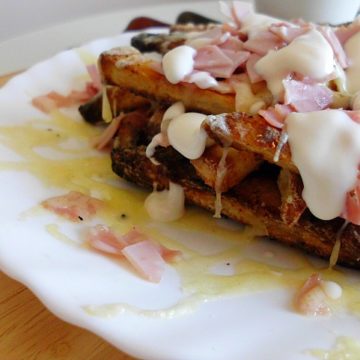 If you're using frozen fries, you can skip steps 2, 3 and 4 and skip directly from step 1 to step 5. Feel free to season your frozen fries with olive oil and the seasonings listed in the ingredients - I'm just not sure how well that will work out, having never done it myself before. 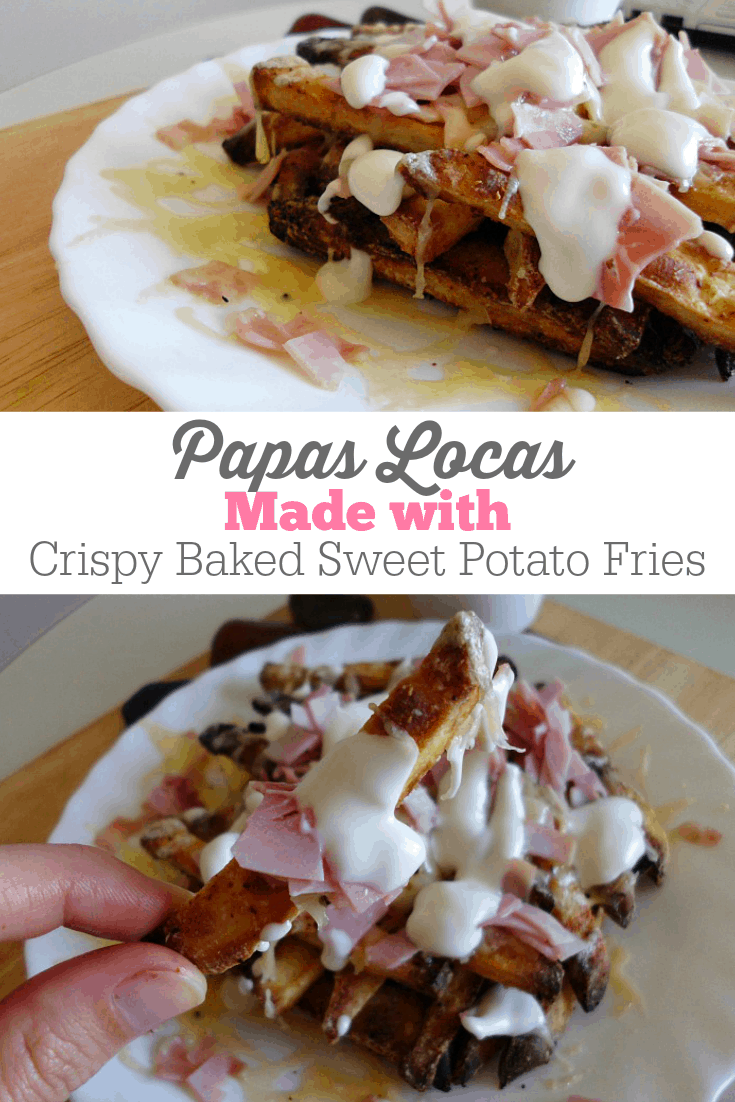