I really enjoyed writing about carnival food in Tenerife – specifically the papa asada – in a previous post and thought it deserved a follow-up. Every time I think of this fiesta feast I uncover a montage of memories – everything from winning a fluffy tiara the first time I had one, to Boyfriend being ill all over the floor the first time he had one.
Take Boyfriend’s advice – don’t eat fast food before going on fast rides which spin around and around… It doesn’t end well.
The star of this post is the perrito caliente especial – or the special hot dog. Just like the papa asada, this hot dog can be mistakenly underrated from just a glance – everything is just piled on top carelessly. It starts off as a jumbo hot dog placed in a soft white bun. Layers of ketchup, mustard and mayonaisse are slapped on top, forming the perfect bed for oodles of crispy onion bits, mounds of cheese and fine, salty chipsticks. 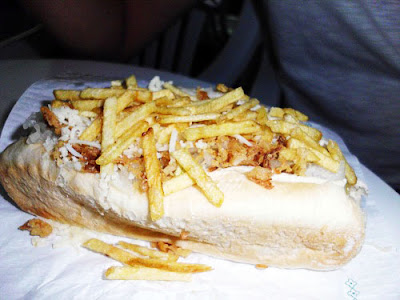 Generally, I do not condone fast-food, but this has got to be my favourite I-cannot-even-kid-myself-this-has-any-nutritious-value food. From the bun loaded with complex sugars and the hot dog made from a negative percentage of  ‘meat’, to the full-fat mayonaisse and the deep-fried chipsticks, this treat does nothing for my health, but does wonders for my happiness. 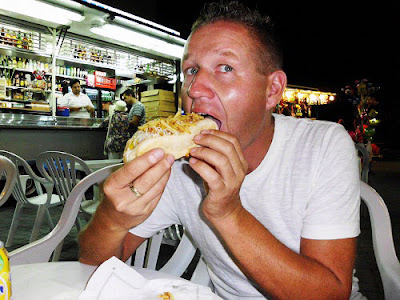 The most difficult and only disappointing part of eating a perrito caliente especial is that most of the chipsticks fall on the floor, the crispy onion lands in your lap and the sauces gloop all over your clothes. Luckily for me, my mouth is so huge that I can overcome all these problems.

Have you ever visited the Canary Islands and decided you loved them so much that you’d like to move here? Then check out the Moving to Tenerife book I co-authored! It’s a detailed guide book full of everything you need to know about moving to Tenerife (and the Canaries in general) including how to get a job in Tenerife, how to become a resident in Tenerife and some basic Canarian phrases that will help you get by in everyday life.