Here's a recipe I thought I'd never, ever share on my blog. Even though I love taking ordinary desserts and adding a healthy twist (I honestly prefer these healthy pumpkin brownies to ordinary brownies!) I've never really got on with healthy snacks made from nuts and dates. Until I made these chocolate brownie no bake energy balls! 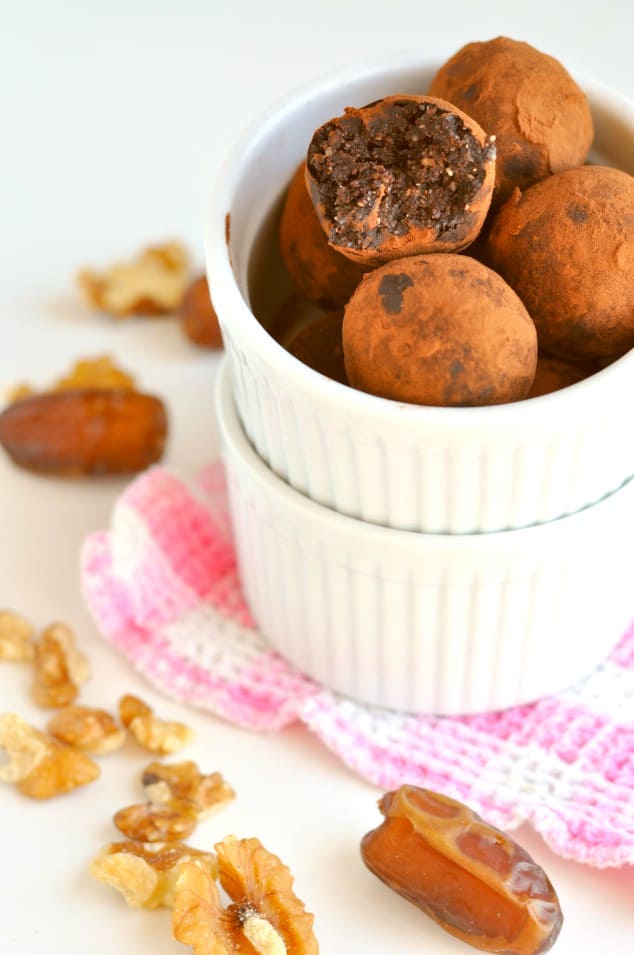 I've been trying to cut down on sugar and when I saw Jessica's raw brownie bites, I felt inspired. They looked so rich, so indulgent, and so chocolatey. But is that how they'd taste? I was determined to find out.

I rummaged around in my oatmeal topping drawer (That's how much I love oatmeal. I have an entire drawer dedicated to stuff I can top my bowls with!), pulled out the ingredients and whacked them in my food processor. My food processor isn't powerful at all wasn't doing much to the fruit and nuts, apart from sending them on the wildest rides of their lives. 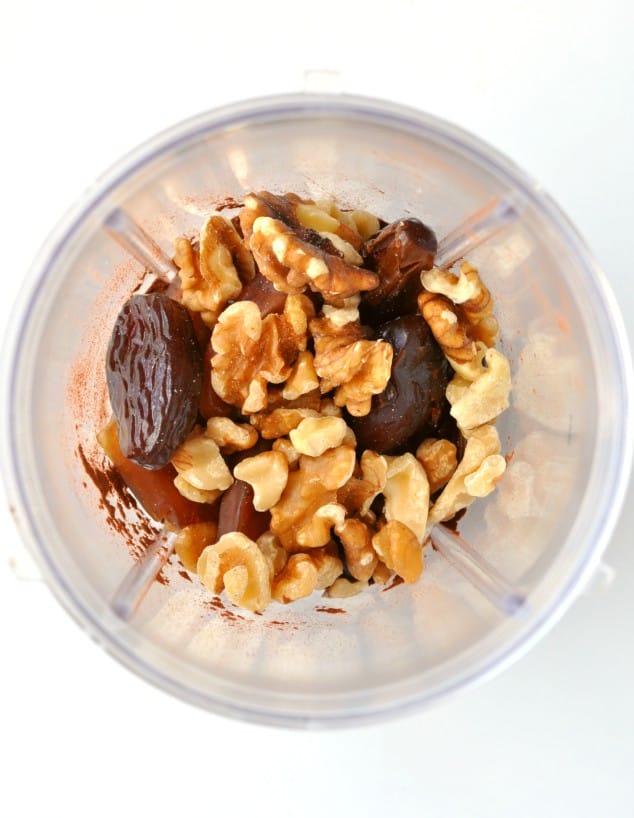 Overcome with disappointment, I put on my happy face (one of my New Year's resolutions is to be more positive!) and pulled out my NutriBullet. And I'm so glad I did!

Over 5 minutes, my food processor had done nothing but slightly bash and bruise the ingredients. But in just 10 seconds, my NutriBullet had totally ground everything down into the fabulously chocolatey paste you can see below. I hate to admit it, but sometimes fancy kitchen equipment is worth the price tag. 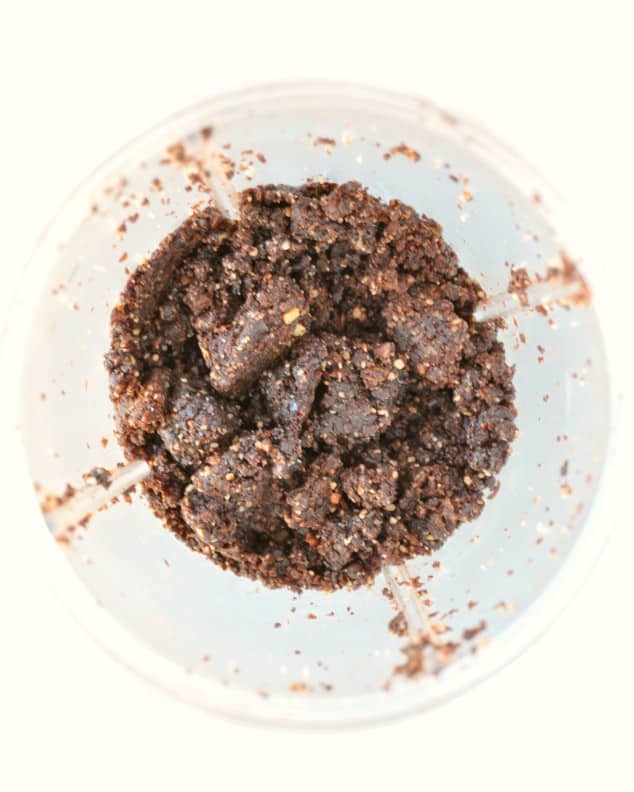 Even as I was rolling the mix into individual no bake energy balls, I was still a little sceptical. It's not like I don't love healthy snacks. It's just that I've been let down by so many recipes like this I wasn't expecting much. But as soon as I popped one into my mouth I was stunned. These delicious bite-sized pieces of heaven turned out to be one of the most amazing snacks I've ever had the pleasure of nibbling on!

They're seriously chocolatey (without the use of any actual chocolate - how great is that?!), oh-so fudge-like, incredibly rich and genuinely satisfying. Everything I want from a healthy treat! And because they're so luscious, you can get away with only eating one or two of them and feeling 100% happy, indulged and satisfied without overdoing it. I don't know about you, but after eating one ordinary brownie, I just want another and another and another... 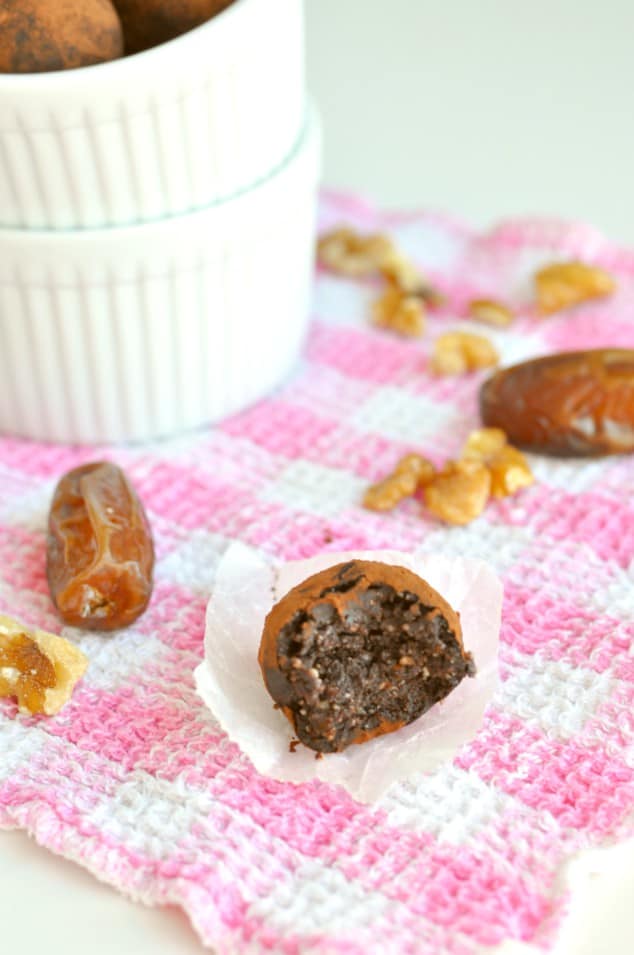 One thing I do need to warn you about with these chocolate brownie no bake energy balls is the noise when you're making them! Throw hard nuts into a NutriBullet and you've got to expect some noise. But seriously? I had no idea just how much noise they would make!

I was surprised the neighbours weren't banging on the door telling me to cut it out. So best make these in the middle of the day, when the neighbours are out and none of your family members are asleep. Or you could always make them in retaliation to noisy neighbours playing bad music or doing DIY. Now there's an idea... 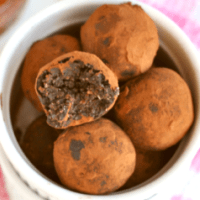 They're seriously chocolatey (without the use of any actual chocolate!), oh-so fudge-like, incredibly rich and genuinely satisfying. And because they're so luscious, you can get away with only eating one or two of them and feeling 100% happy, indulged and satisfied without overdoing it.
5 from 7 votes
Print Recipe Pin Recipe
Prep Time 10 mins
Total Time 10 mins
Course Snack
Cuisine Vegan
Servings 9 energy balls
Calories 69 kcal

Store the vegan brownie bites inside a sealed container in the fridge until you're ready to eat.

Calories: 69kcal
Tried this recipe?Let us know how it was!
« Healthy Baked Sweet Potato with Easy and Delicious Homemade Chili
Healthy Microwave Cheesecakes for 2 »